Paul first joined IAE as an employee in 1997 and after 24 years of service to IAE as a HGV Class 1 Driver, Paul finishes his career with IAE this week to begin his well-earnt retirement.

Prior to joining IAE as a full-time employee, Paul ran a small fleet of lorries that were dedicated to the coal industry and in 1996, as the coal industry was diminishing, he started driving and delivering for IAE as an external contractor. This lasted for 8 months before Paul joined IAE as a full time HGV Class 1 driver.

During his 24 years, Paul has delivered all over the country, from North to South, East to West, and he prides himself on always being old school with his navigation techniques; preferring to take directions from a map over a SatNav.

For the vast majority of Paul’s career at IAE, he has worked within the Industrial sector and has delivered to some of IAE’s most prestigious jobs. He has made deliveries to many large warehousing projects, including Amazon, Co-op Food and Nisa, as well as making deliveries to some high-profile clients and locations, which have included: Lady Diana Spencer’s sister, Rick Parfitt, Sir Frank Williams CBE (founder of the Williams F1 Racing Team) and on one occasion to a top secret RAF base located on the west coast and used for listening to submarines and launching strike aircraft. It is these varying and diverse places that Paul has had the pleasure of delivering to that has given him great job satisfaction over his career and why he has chosen to remain working at IAE for so long.

Looking forwards, Paul plans to spend his retirement at home with his wife Jean, whilst also fishing, gardening and most probably playing taxi service to his three fantastic granddaughters. Paul is going to miss all of his wonderful colleagues, as well as many of his Industrial customers that he has delivered to on a regular basis and we know they will all miss him just as much.

On behalf of everyone at IAE, we want to congratulate Paul on a brilliant service of 24 years and wish him a very happy retirement. 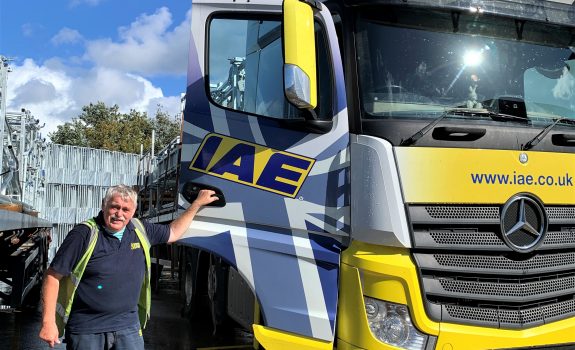